From Selma To Gaza 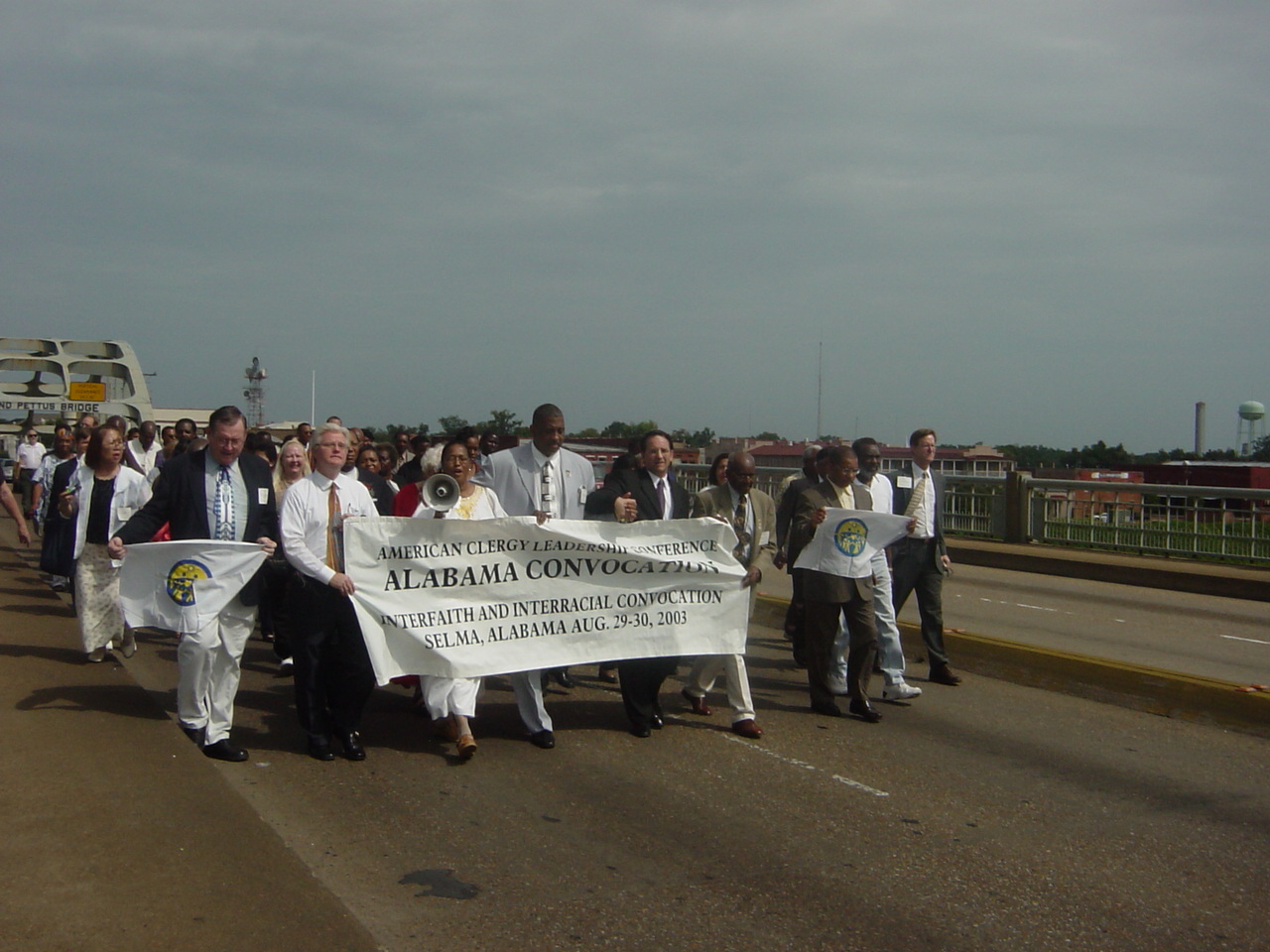 On the Edmund Pettus Bridge in 1965 600 Christians marched and were stopped at the bridge by Alabama state troopers. Just before the march Dr. King received a call from the FBI to call off the march. The FBI's role was to protect the marchers. They had discovered that many of the key State Police officials and the superintendent over the men on the bridge were leaders in the KKK. The march was not called off. It led to Bloody Sunday - this struck the heart of America so significantly that it caused the voting rights of black Americans to be rapidly achieved from this day.

Today, ACLC led by Rev. Rawls of Selma organized a march across the Edmund Pettus Bridge. This time, black, white, Asian and Hispanic, Rabbis and Imams, Syrians and Selmans marched together. The Police were our official escort and now were composed of black and white policemen. Through the righteous coming together and standing on the religious foundation that is needed the political leaders can go the way of righteousness and justice in America. America was made for this purpose. To bring out the injustice of the world and then through religious leaders putting their lives on the line the conscience of the people can be touched. Because America is founded on such principles it could be called to a position to advance the cause of equality for black people and through the movement created her in America a process of bringing equality to the world has now be irreversibly put in motion.

True Father is taking this Elder son nation through the Christian foundation and the victory of the reconciliation of the first, second and third Israel to form a new nation the fourth Israel composed of Christians, Jews and Muslims together with all religions to bring the irreversible movement to restore and bless the family leading it back to God. This new nation begins tomorrow with our Cheon Il Guk Holy Wine Covenant in which we as the reconciled Blessed Families come together to enter the fourth Israel. The Fourth Israel is a substantial body whereas Cheon Il Guk has only been a "spiritual nation" composed on members of the Family Federation. Through the religious leaders, Ambassadors for Peace, heads of State and various professional of all vocations having become Ambassadors for peace a substantial body of the fourth Israel is now recognized by God. It is real. Now that the fourth Israel is founded on the principles of God, it has the authority to bring the healing and reconciliation to all of the worlds pains.

That's why today on the Edmund Pettus we prayed as the fourth Israel proclaiming now that we have marched in Selma, we will now go to GAZA and march with our brothers and sisters there from all religions. Our voices rang out today as Rev. Daugherty cried that this bridge has before been troubled but now it is peaceful from this place we walk together as Jews, Christians and Muslims and we want to build a bridge of peace, not only for ourselves of for America, but we want to build a bridge between Palestine and Israel. We are going to heal the division of our brothers there. The division of Isaac and Ishmael.

As we marched over the bridge, we sang and shouted and the we could feel that the spiritual walls are coming down. Alleluia.