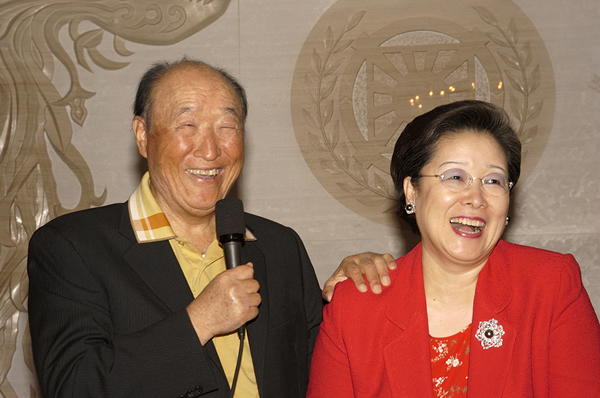 Thanksgiving was truly a joyous celebration with our True Parents. We ate Sashimi that True Father caught fishing all day on the cold Hudson River. This time True Parents invited husbands and wives together.

True Parents and True Family entered to great applause from many American and international couples. The atmosphere was very happy and hopeful. America has been blessed by True Parents. True Parents look great, Father and those who went fishing looked red from the cold wind and sun. Still all was beautiful. We did Kyung Beh to True Parents and then began to cut the Turkey.

Dr. Peter Kim (who recently received an Honorary Doctorate from Sun Moon University) was MC. As always Dr. Kim knew how to create the atmosphere that brought everyone to a great feeling of calm and happiness.

Dr. Yang, True Mother called on Rev. Joshua and Clare Cotter - they sang a beautiful Korean song followed by Joshua's powerful rendition of the Impossible Dream, Dr. Kim called "Imam" Taj Hammad who sang a Muslim song - Father really smiled at this. Mr. Shimmyo played the harmonica and then a second generation law student from Germany Mr. Kim sang with the karaoke. Kook Jin Nim sang I believe I can fly - it was beautiful with such heart , Kwan Jin Nim was here from California !! This made True Parents especially happy. He sang as a professional Korean and and an American popular song. Hyung Jin Nim sang and tore up - he is also singing as a professional - but far beyond professional - with heart. Hyung Jin Nim also sang a Gospel song and began by saying "We have to praise the Lord Up In Here !!!" Then Sun Jin Nim and In Sup Nim sang together. Finally True Parents sang in a way that exhibits one of the warmest moments that we share together as a family. Father and Mother gently singing with each looking eye to eye with such love. They sang Arirang and Father kissed Mother on the cheek. It was a warm Thanksgiving for America and for History. The Parents of Heaven and Earth with the Heavenly host, the Presidents, Jesus and all the saints celebrated and gave thanks to God for what he has done for America and the World.

We concluded with brief and most meaningful reports from Rev. Kwak and Dr. Yang.

As you know this year has been one great victorious year for our True Parents, we began with the Holy Wedding Ceremony for the Parents of Heaven and Earth Opening the gate of Cheon Il Guk and the Coronation of True Parents as the King and Queen of all Blessed Families. Because of this Holy Wedding, all families could be "born" into the new age of Cheon Il Guk. Also, at this time, Father organized and began the "Family" party to establish and realize the heavenly Kingdom on this earth. Later Father proclaimed the nation of the fourth Israel. Which is the main hope and fulfillment of the 1st, 2nd and 3rd Israel. This opened the door for a new stage in history completely different from the past. Also this kind of effort does not simply come. Father already laid the indemnity conditions linking the three Israels. On May 18th the Jerusalem Declaration centering on the first Israel, June 29th the Washington Declaration centering on the second Israel in the capital city of Washington, D.C. and finally the Seoul Declaration on August 15th centering on the third Israel. On this foundation Father proclaimed the fourth Israel as the substantial horizontal nation of God's kingdom. It is substantial. Now True Parents transcended all national boundaries and borders as the King of Kings. In this sense the under the original principle under True Parents national boundaries don't have any meaning. Also religious boundaries are don't have any meaning any more. Now the Interreligious foundation is now real and now moving as one. Father always emphasized the Interreligious and the International are moving as one.

This was the original ideal and God's hope for the UN. That the religions of the world would be harmonized and that the governments of the world would achieve peace and harmony centering on the second coming. United Nations was created as the world government and world parliament prepared for the Second Coming. The UN however was not able to fulfill its responsibility. Therefore Father began the activity to bring the Interreligious council into the United Nations. However the current structure and character of the UN makes it almost impossible for this to succeed. Therefore Father had to achieve the establishment of a new body. The "Abel" UN. There should be three stages. The Interreligious and International Peace Council formed by the October 3rd conference was established. Then we should establish the "Peace" UN through cooperation with the existing UN, the we should achieve the "Peace" Kingdom. On October 15th Father proclaimed that we jumped over the Peace UN phase to the "Peace" Kingdom. Father then initiated the providence centering on Israel and Gaza. Several activities will be held. The IIPC Conference , will have several components, the three branches of government, (legislative, judicial and executive) plus the religious leaders, plus the media, financial (bankers and business). Father will educate that real peace comes through Interreligious dialogue and harmony. While we will have that campaign we will have a Peace March in Jerusalem, mainly Jews, Christians and Moslems. The same day in Tel Aviv we will have a big rally. Mainly the three Abrahamic faiths and Buddhism and all world religions. On the 23rd we will have a rally in Gaza.

Yesterday in Washington D.C. we met the Israeli Ambassador to the United States. This time is a very important opportunity. During this period I will meet the Prime Minister of Israel and testify to True Father's vision and way. Also, as you know Father proclaimed all dispensational organizations, FFWPU, WFWP, AFC, UPI, WT, CARP and all organizations are under the Peace Council. Now UPI and the WT will report clearly concerning the direction of the Peace Council. War is a serious and terrible conflict and must be ended.

Father emphasized that 7 nations must focus on this movement. Father directly Dr. Yang and the American movement must mobilize 1440 leaders from Rabbis, Pastors and Imams and Korean Christians will go together. We are do to door visiting and peace march and rally and 3000 will wear this kind of jacket with the Peace UN logo. Father's future plan is to influence leaders of great opinion and power. Will make a Peace UN movement worldwide toward all human beings. We all must keep our confidence and use this opportunity. We must testify who is Father and realize Father's vision for Peace. How Father initiated such important dispensational victories.

Dr. Yang's Report: The second Israel has been standing to initiate this providence. Last May 18th Father sent us to Israel. We didn't know how serious the situation was. We saw reconciliation occur but the next two pilgrimages became much more serious. There were many walls. Particularly the religious walls. Particularly Israel. Jerusalem is the center of the Abrahamic faiths and it is the Holy Land for all three. This all began with the 20th Anniversary of the WT where Father proclaimed that we must take down the cross. On good Friday 123 churches took down the cross. Now 1200 have affirmed the end of the era of the cross. Also the first Israel had rejected Jesus and because of this the situation of strife and enmity exists today. The purpose of the Second Israel is to help the first Israel to overcome this negative condition through restoring the relationship with Jesus. This has grown through the Moslems and Christians and many Jews. Through the 50 state speaking tour Father made the foundation for Christianity to unite as one. Centering on Rev. Kwak our whole movement will unify together. Now Father has made it clear that we must bring 1440 leaders (360 Imams, 360 Rabbis, 360 Christian Pastors, 360 Korean Christian Pastors from America.) We shouldn't just invite anybody but we must invite those who have a congregation over 100. This is related to the 144,000 in the Bible. We blessed last year 144,000 Christians last year and that was the foundation through which an incredible change could occur in all religions joining in the subsequent blessings. From this moment we will search every possible way to get to Israel. Once again this is the last stage of God's providence of this year. This whole year we have been witnessing Father's sacrifice and life risking course to overcome the darkness. All American's must now come together and stand together as one to bring this great and powerful spirit to God and True Parents.

We concluded with four cheers of Ok Monsei (one was Thanksgiving Mansei!!)