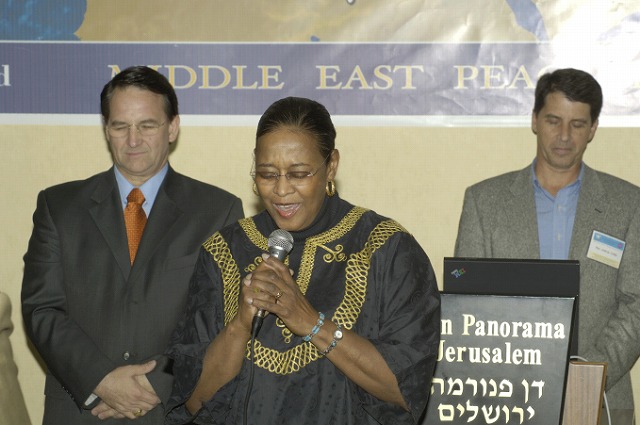 Greetings from Jerusalem - our first day

One hundred twenty ambassadors for Peace, religious leaders and Family Federation 1st and 2nd generation traveled to the Holy Land on Nov. 15th in support of the world tour of our True Parents and the launching of the Universal Peace Federation. From the very opening it was clear that a new day had dawned. Before her departure on the trip, Methodist minister Dr. Gloria Wright told many in her Georgia church, "This is my third pilgrimage and this will be the most historic and important journey yet. I can feel it in the spirit."

Our opening plenary began on Tuesday, Nov. 16th, in the morning with a review of the history of Father Moon’s work in the Middle East since 2003 when the ACLC first journeyed to Israel centered on ending the era of the cross. Rabbis, imams and Christians could join together in Jerusalem to sign the Jerusalem Declaration. This deeply moving history traces the historic steps from the Jerusalem Declaration to the crowning of Jesus, to the women’s pilgrimage, to the international Middle East Peace Initiative in which 10,000 Ambassadors for Peace came from every continent and 151 nations of the world.

There is clearly a transformation going on in the Middle East that can be understood only by coming to see it firsthand. A new dimension of our efforts is unfolding as we see the enormous contribution and value of the younger generation of Unificationists, many of whom have not ever witnessed clergy from different faith traditions testifying to True Parents with the same faith in this movement that they and their parents have shared. Many of our 2nd generation are really overwhelmed by the fact that we are really participating in the peace process, and in so doing making history. God is working in an amazing way.

Our first day began with an orientation session and testimonies by Archbishop Stallings, Rev. Edwards, and our Jerusalem Ambassadors for Peace. Dr. Glaubach, former city council member, challenged everybody by asking, "Do you know how many times Jerusalem is mentioned in the Old Testament?" Several clergy guessed and they were close, but Dr. Glaubach had the exact number – 995 times. Then he asked, "How many times is it mentioned in the New Testament?" Again, no one knew the exact number. He said, 144. There is no city in the world that is referenced by scripture to that degree. Therefore, we have to realize that we are standing on the ground from which the Scriptures came.

It was from this land and its people that the prophets stood on Mt. Scopus and received the heavenly inspiration of God and wrote the Scriptures that formed Judaism and Christianity. This is the land where Jesus established his eternal victory and teaching, the place where he shed his tears, sweat and ultimately his blood for the salvation of humanity. This is the place where the prophet Isaiah stood on the mountain and cried out to the people, asking them to obey the will of God, warning them if they didn’t, God could not protect them.

Mr. Walid Sadik, former Knesset member and a prominent Muslim political leader, moved everyone’s hearts when he once again shared that without a doubt the Middle East Peace Initiative is moving the people down the road to peace. Baruch Shalev, another Jerusalemite who is a key figure in guiding our peace process, shared with us that the key to understanding the Jewish people is to realize their fear. For the last 2,000 years, no matter how much they were embraced, no matter how much acceptance they gained in society, history repeatedly showed them that all of these bonds could be dissolved in a moment. The Jewish people could immediately become the object of the deepest hatred and persecution in history. Because of that, underneath the Jewish heart is fear. "What is exciting is that Father Moon and this movement, the MEPI, are slowly but surely taking away this fear. I can see the process and I sincerely feel hope."

We are deeply grateful for the Ambassadors for Peace from the whole world coming to Jerusalem. Dr. Joshua Ben Ami shared that his profession is as a professor of biblical studies, saying, "I am an expert in the field of professional study of the scriptures in the original languages, both the Old and New Testaments. But after I joined with my brother, the rabbi, to bring the crown to Jesus as an act of love and reconciliation, intense scrutiny came upon me and my life from my students, the university, and the international institutes that I was part of. They wondered, how could you as a Jewish person do such a thing? The reason I could do it is because I know what was right in history. I know the Scriptures and this is what had to be done."

Archbishop Stallings shared a very moving testimony of what it was like to call upon one of the rabbis of Israel to sign the Jerusalem Declaration proclaiming repentance for not having embraced Jesus. He captured that moment of May 18th, 2003, the incredible tension, the incredible feeling of being at a crossroads in history that had to be gone over successfully if we are to end the old sad history of division, suffering, and persecution and enter a new age. He felt he himself had to repent first before calling upon the rabbi to come to a place of repenting. After he repented to everyone present for what Christianity had done to the Jewish people for the last 2,000 years, a tiny moment of opportunity appeared in which the heart of the representatives of Judaism could open.

The declaration was translated word for word to the rabbi. When Archbishop Stallings, asked, "Would you sign with me this Jerusalem Declaration?" the rabbi replied, "Yes, I’ll sign it if my Muslim brother will also sign." One Muslim leader came forward signed this eternally important document, which later became the basis for True Parents proclaiming the formation of the 4th Israel, a new beginning for the chosen people of all faiths, races and all national backgrounds. All who would partake of the blessing of True Parents would now enter this new Israel, one in which Muslims, Christians and Jews could share equal status as people chosen by God to build the peace kingdom. It was a day of glory. Archbishop Stallings captured the moment again for us.

After seeing the presentation, many commented that it’s amazing how far we’ve come. We didn’t even know what we were to do when Father Moon asked us to go to Jerusalem. We didn’t know it would lead to a transformation of this dimension.

In the afternoon we went to Gethsemane. It was beautiful to see our delegation gather around the tree in which Father Moon placed three nails in 1965, 40 years ago – one for Islam, one for Christianity and one for Judaism. When you stand in the Garden of Gethsemane where Jesus prayed his final prayer, you cannot help but be overwhelmed. From this place you can look across the Kidron Valley and gaze upon the Eastern Wall of the Old City and realize that Jesus prayed looking at the Jerusalem, the city of peace. Now 2000 years later we have come again to pray and gaze over the city. However, this time the triumphal entry will not result in death but will end in blessed families and the joy of seeing all faiths unite together as one.

Dr. Joshua Ben Ami had the courage as a Jewish scholar and man of Jewish faith to stand up and give Jesus a crown. This history can never be erased. When some of the rabbis struggled over the persecution they received over the Jerusalem Declaration, Dr. Ben Ami’s unwavering faith held the declaration safe, just as Joshua protected and kept the 10 Commandments by his faith in God’s will, centering on the tabernacle. God revealed at that time that if just one person would keep faith in the tabernacle, all would be secure. We count it no coincidence that another Joshua has again kept the faith, and now the doors have opened and thousands of Jewish people are coming forward to affirm the true meaning of their tradition.

We prayed at Gethsemane and were overwhelmed by the spirit there. It is my favorite place in Israel. It’s where Jesus and God came together in heart and tears to give of themselves for the sake and the hope of the future, which is now coming to be completed.

From Gethsemane we went to the Upper Room, where Jesus held the Last Supper and after the crucifixion appeared before his disciples, leading to the Pentecost. Rev. Edwards prayed and spoke there. Suddenly a spiritual fire broke loose. When he called for people who needed healing to come forward, many came, young and old alike, Unificationist, Christian and Muslim. It was beautiful to see the spirit of the Lord working to bring healing, spiritual and physical, to the Ambassadors for Peace.

Next we went to Caiphas’ house, where Jesus was led from Gethsemane to his final prison. We walked on the same steps that have been proven to be the steps there 2,000 years ago, the steps that Jesus crossed in bondage. Then we entered the dungeon in which he was kept the night before he was taken to Pilate, just before his crucifixion. Words cannot describe what it is like to stand in prayer in Jesus’ final prison.

Dr. Arthur Hilson gave a profound and moving prayer at that moment, calling us to realize the suffering of our Lord and how he overcame it and brought the victory of love and forgiveness. Dr. Hilson had us hold hands, intertwining fingers together. As we did so, we felt the spirit of the Lord was upon us. These are overwhelming experiences. We feel that everyone in our movement and everyone in the ACLC must plan to come on this journey, which we will continue very other month until the walls totally come down and True Parents can be received and welcomed in Jerusalem.

There are many reasons why we go on this journey, but the most important reason of all was expressed by Dr. Glaubach: that the path of peace of Judaism, Christianity and Islam eventually must go through Jerusalem to find its completion and victory. We prayed for peace in the City of Peace. Thanks, America.